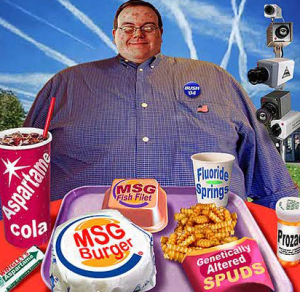 America is running on Dunkin’ isn’t just a slogan, it’s the truth…our diets are becoming increasingly worse.  NEVER EAT THIS AGAIN is a look at 10 foods you should never eat….EVER.

1. FROSTING: Believe it or not, but store-bought frosting is loaded with trans fat. As we know, trans fat lowers good cholesterol, raises bad cholesterol, and causes bloating…ultimately leading to belly fat, heart disease and diabetes to name but a few ailments. If you want to know what you’re eating, make it from scratch.

2. PROCESSED BAKED GOODS: Think of it this way…if something is able to live on a shelf…for weeks on end…you know it must be bad for the body. Pre-packed mini-muffins, dessert cakes and the like are packed with calories and unwanted sugars. If that wasn’t enough to steer clear of these shelf-life-time-bombs, they aren’t the easiest to digest. If you want to be healthy, eat clean. And by “clean” I mean, it food that is as alive as possible. If a food has an ingredient you can’t even pronounce, chances are it’s NOT something you want going into the gas tank known as your body.

3. SODA: I know…this is a hard one. It is hard to imagine watching a movie with a big bucket of popcorn (we’ll get to that later) without the accompaniment of a cup of the sugary bubbly stuff. BUT…and that’s a BIG BUTT…soda is like having a glass of water with 15 packets of sugar. Crazy when you think of it like that, but it’s the truth and not something you want your adrenal glands to deal with.

4. SUGAR CEREAL:  If sugar is the first ingredient on the box, PUT IT BACK. That goes for the second, or even third ingredient. If you want something good for the body and good for the soul, opt for a bowl of oatmeal with some fruit. If oatmeal isn’t your thing, grab some yogurt with fresh fruit. In a hurry, grab a banana and a piece of toast. Grab anything but that bowl of sugar in the form of cereal.

5. MARGARINE: This is even gross to talk about, but margarine is LOADED with trans fats. It might be easy to spread, but ask yourself WHY is it easy to spread? If that’s how you like to “butter your bread,” then keep the butter dish in the cupboard and go wild. The real thing, as in organic butter, is always better than the man-made stuff to make your life easier.

6. BACON: I know. This is another tough one. It’s high in fat, sodium and preservative sodium nitrate. If you’re adding it to your salads, opt for some crushed almonds or other nuts, but fried pork is not good for the plate.

7. MOST THINGS IN A CAN: In a recent study, researchers tested food from 50 cans (collected from pantries in 19 US states and one Canadian province) for BPA contamination and found the bad stuff in 46 cans (92 percent of samples). This is not something you want. Again, always choose live foods if you can. Too busy to be a daily shopper, then buy your food from a delivery service like AMAZON FRESH or other grocery shopping services.

8. HIGH FRUCTOSE CORN SYRUP: It’s everywhere because high fructose corn syrup is cheap for corporate food manufactures to use then the real stuff.  America has gone from 20 teaspoons of sugar per person per year to over 150 pounds of sugar per person per year.  Those numbers are staggering, because it equates to a half pound a day for every man, woman, and child in America. The average can of soda contains fifteen teaspoons of sugar and most of it is high fructose corn syrup.  When you eat sugar in these high doses, it becomes a toxin in the body.  Read the label.  If you see HFCS, put it back.

9. PROCESSED DELI MEATS: Deli meats are high in nitrates and sodium, which are harmful to your overall health.  The American Institute for Cancer Research tells us that consumption of processed deli meats is related to an increased risk of colon cancer because the nitrates in these ‘mystery meats,’ once digested, can form nitrosamine, a powerful cancer-causing chemical.  Try this solution if you need sandwich meat for the week…buy extra organic chicken on Sunday and barbecue for the week.  This way you have fresh, organic sandwich meat and you steer clear of the gunk inside of deli meats.

10. ARTIFICIAL SWEETENERS:  University of Texas found that lab mice who were fed the artificial sweetener aspartame developed higher blood sugar levels, which cause you to overeat, than mice on an aspartame-free diet.  If you like sweetener in your coffee, grab for the Agave or Honey.